The idea of running for fun or exercise in Albania is very new. For women, it’s virtually unheard of. Here in Lezhe Jen and I both regularly run for exercise on a loop through a neighboring village, and we both are always the only ones running on the road. We encounter all kinds of stares and shouts and the occasional more serious incident of harassment, but it’s something that keeps me healthy and sane and is a routine I enjoy so I stick with it. I also like to think of it as a cultural exchange. I’m setting an example for women here that may not know how or why to exercise. If anyone ever asks me what I am doing, I stop and talk to them for a while.

This past Saturday I had a chance to participate in a more formal running experience here in Albania. The fourth annual Folk Games took place in the castle of Shkoder, the large city to our north. These games are sponsored by The Door, a Norwegian NGO and partner for several PC projects. One of these Peace Corps projects was the first ever “Race to the Castle,” a 3k run organized by a few friends who live in Shkoder to correspond with the day of the Folk Games. They put a ton of work into the event and even got t-shirts donated and bib-numbers sent from the states. 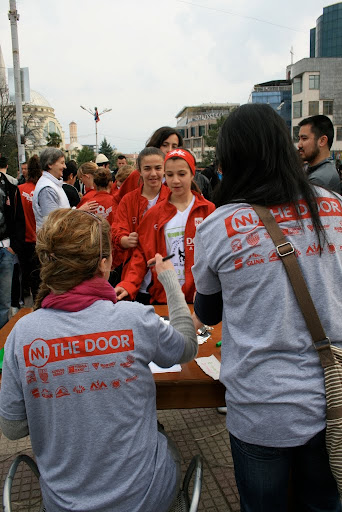 As it turns out, despite the lack in running culture, the Shkoder volunteers had more than 100 people register for their “Race to the Castle,” mostly youth from the local schools. Some PCVs and even our country director and security coordinator came from other cities around the country to run. I headed up for the day to help out with the logistics and was stationed at the finish line.

At the line I had a time sheet and my friend Michele held the stopwatch. The idea was that we would write down times while another volunteer would collect bib numbers in the order that the runners crossed the finish line. This meant that we could easily associate bib number with time in order of when the number was collected. If only it were this easy.

The finish line was located on the road (the only road) to the castle. Because of the games starting about an hour after the race inside the castle, there were crowds of people and dancers and cars trying to get up the road and our police road block had fallen through. As the runners began to approach the finish line, cars still honked and passed each other right where we were standing and it was mass chaos to say the least. At one point Michele and I stood in front of a honking car to prevent it from passing as a policeman pestered us to move and we tried to explain in shqip that we could not leave as we were the time keepers and that this was all very dangerous and please could he tell the cars to not pass….All while the TV station cameras were up in our face and runners kept coming past and asking us their times while we were trying to take the times of the people passing…I wish I had the whole experience on video. At times like this, there’s nothing you can do but laugh. My life here is hilarious if I think about it too much.

Needless to say our time keeping/bib number collecting system completely failed. This was largely due to very few of the runners actually submitting their bib number in the midst of the craziness. Then, when everyone had finished, some girls who hadn’t given their numbers at all came up to us claiming to have placed first and second (not likely). This all meant that we ended up not declaring any winner at all. And, for a competitive culture this was disappointing to many.

Despite the fray I had a great time and most of the participants seemed to really enjoy themselves. One or two of the people who came up from Tirana said that the was better organized than marathons and half marathons they’ve participated in in the Balkans. At the very least we came away with a lot of suggestions of what to do next year….and had fun promoting running for health in one of the largest cities in Albania.