Today my country director came up to Lezhe to see the tree planting/bench and trash can placing at the school where my counterpart have been working for the last few months. We also taught a few recycling lessons at the school yesterday as part of the same project. All went really well! I’m so happy to be seeing some physical work done on this project after just talking about it and planning for it for months. And, of course, so many of our plans changed at the last minute. For example, we showed up today and they were putting in the trash cans in the wrong place…so naturally a colleague from the Bashkia just pulls it out of the wet cement and places it where it’s supposed to go! I’m so relieved/excited that it is all over…now I can focus on follow up work and reporting and start something new. I’d love to work with this school again sometime in the future!

In between all the work madness this week Jen and I made time to enjoy the weather and make some fun Easter Egg creations (Albania themed) and prepare for an epic hike this weekend. We’re headed down south with 8 friends to do a two day hike to the coast ending in Himare.

Some photos of all the happenings: 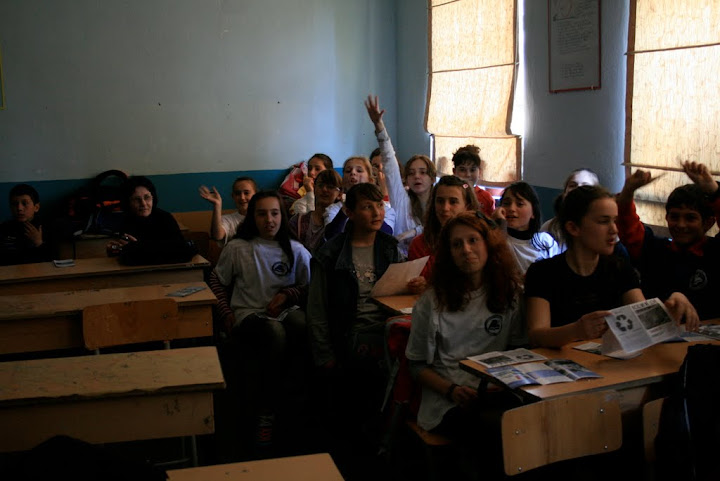 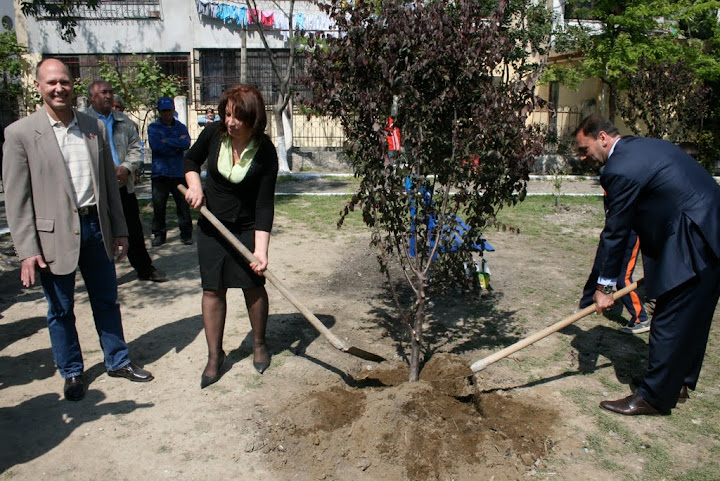 My country director, the school director and the mayor planting a ceremonial tree 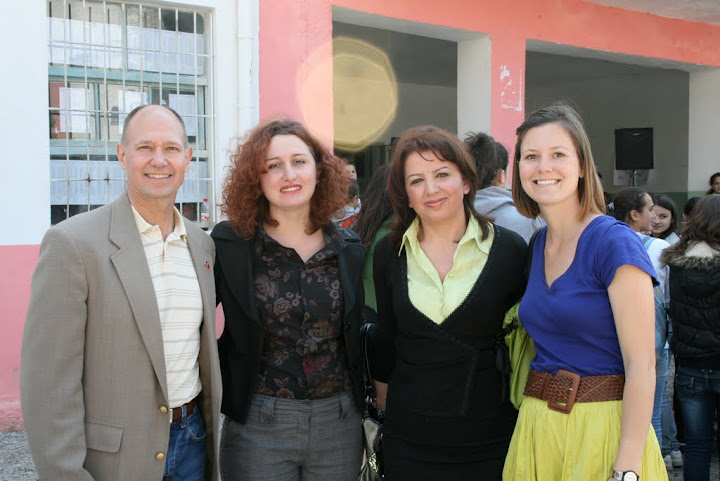 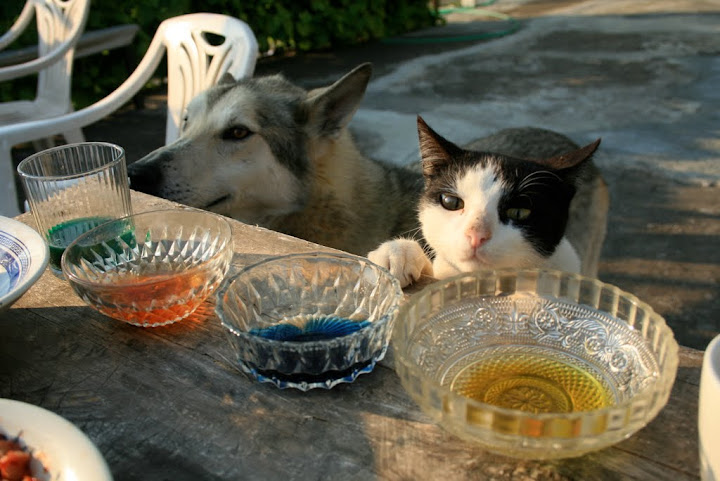 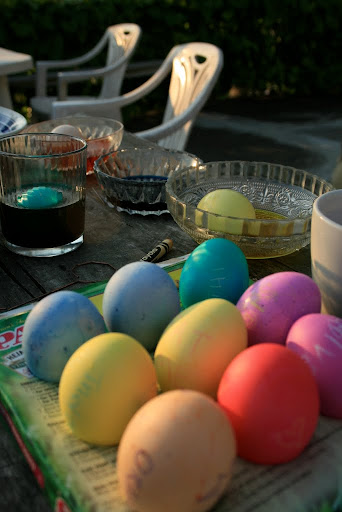 More photos are on the photos page

The other day a girl who is the IT professional in the Bashkia and a good friend/office-mate of mine asked me what I was going to do as I left the office at 1pm. I told her I was going to take the afternoon off and enjoy the great weather. She lit up with a smile and said “Like!” with a big thumbs-up. We both laughed and I headed out the door.

This is just one example of how much Facebook has permeated Albanian culture. For a country in which few have home computers, just about everyone has easy access to an internet cafe (there are about 30+ in Lezhe alone) or school computer lab. And most of what these computer labs are used for is Facebook…so naturally this means that just about everybody has at least one Facebook account. I say “at least one” because the youth are big on aliases – the students in our Outdoor Ambassadors group and English class have multiple accounts under different names. It’s taken the Albanian social culture by storm – they are obsessed.

At work my colleagues who have internet are on Facebook constantly. But, it’s usually not for the social media community mobilization purposes that have made Facebook and Twitter such powerful media tools in the United States. Here in Albania that kind of usage is creeping in slowly – especially with this current election. My colleagues consistently update the mayor’s Facebook page.

The way I see it there are two major things that keep social media as a social network and less as a way to disseminate information “virally” in Albania (which is what I think it has morphed into in the US). For one, the fact remains that there are still gaps in access – the older generation and rural populations are not usually online. This means messages published using social media don’t have the same breadth of impact. Secondly, there is not a strong culture of public participation or philanthropy here. Yet. The “communist hangover” that Albania is experiencing is apparent in the fact that there is only a fledgling civil society held up mostly by foreign NGOs. Plus, the whole “causes” side of social media – the “I believe/do this and want you to do it to” sentiment – is not apparent yet.

However, all this is changing. The fact that Facebook is even used as an election tool is something that I’m pretty sure didn’t happen in the last elections. On the civil society development front, I”ve been involved in meetings with an NGO/think tank that wants to promote new initiatives to develop community liaisons (like neighborhood interest groups) in cities throughout Albania. This would hopefully help promote public investment in decision making and participation beyond the default political protest in response to some complaint with the leadership. I helped a foreign organization conduct a survey a few weeks ago in Lezhe and it was startling how few people understood what it was or what to do – I sometimes take for granted how many surveys are thrown our way in the US. This election season I have learned more about the way politics works with and motivates (or doesn’t motivate) people in Albania than I did in my first eight months working in the municipality office.

Face to face relationships and the value of taking things slowly are so much a part of Albanian culture that it will be interesting to see how social media and other communication outlets like the smart phone grow in use here. I feel like they’ll make a dent in the “relaxed” (read: non-punctual) work atmosphere here and increase accountability. But maybe not?

Lately I think the ladies who work in the public works (i.e. parks) department of the Bashkia spend most of their time putting up and taking down flags and posters.

For example – I left for one day this past weekend to help celebrate a friends’ birthday in Tirana and came back to find the whole town plastered in larger-than-life posters and billboards of the current mayor. Guess who puts them up?

One month ’til elections here, and we have a hotly contested race in Lezhe – the current mayor running against the past mayor. The two are competing not only for the seat, but also for advertising real estate around town. It seems that each day the position, condition and amount of posters changes based on what’s going on. Yesterday the Prime Minister came to town to rally for the current mayor and magically all the posters of his opponent disappeared over the course of the afternoon, only to be replaced by colorful party flags (together with NATO, EU and American flags -it still confuses me to see US flags everywhere) all over the square. But, the opponent’s face was starting to be put back up all over this morning. The effort involved in keeping up appearances sometimes amazes me.

In the election cycle here, all mayors are up for reelection at once after their 4 year terms. This means that there will potentially be a great deal of upheaval come May 8th – especially in the world of PCVs working with local government. A new mayor could mean a lot of staff changeover within the Bashkia.

Currently I’m trying to balance keeping up with work with trying to “stay out of it” election-wise. As I said before, right now though it seems that everyone in the Bashkia is so busy with the election that I probably won’t be able to do much in the office until mid-May. I’m glad to have a lot going on with the schools and other projects for the time being. Outside of the office I’ll be helping to teach recycling lessons for our project at the 9-year school next week for Earth Week, Jen and I are continuing to work with our English and Outdoor Ambassadors groups … and in a few short weeks my parents and my sister will be here to keep me occupied.  Also – though it’s a bit frustrating right now, this work lag gives me time to think about what I really want to/can do in the Bashkia over the next year…. a bit of spring re-evaluating to go along with the re-energization the weather is bringing!

“Because the earth is extremely unfaithful, it offers itself to the foreign eye and deceives our eye, our indifference, our ways.” – Pablo Neruda, “The Islands and Rogovin,” 1967.

So I feel like I’ve been neglecting this blog a bit lately.

This is probably due to the fact that after the recent time change it stays out light later and later each day. The return of ample daylight combined with the amazing summer-like weather we’ve been having means a lot more potential playtime outside after work. Lately my excuse for delaying doing anything on my computer is “I can do it after dark.” But the only problem with this logic is that now it gets dark pretty close to my bedtime. Hence I’ve started to neglect those activities having to do with my computer almost completely. The good news is that there’s been a sharp rise in the activities I can do outside to make the most of the daylight – reading and exercising and socializing.

On another note, this past weekend I got my first chance to meet many of the new trainees when I went down to Elbasan to give a presentation. At first it was really overwhelming being around 41 new people – so many questions and work comparisons and the whole experience brought back a lot of memories. I’m very glad to not be in the shoes of a trainee anymore. When I returned to Lezhe I took two trainees with me and we hosted them for a three day view into the life and times of a PCV in Albania. It was an exhausting but great time and really made me not only realize how comfortable I’ve become here but also rediscover a lot of things I love about Lezhe through the eyes of people seeing it for the first time.

Now life is back to busy and I’m getting a lot done – planning projects with two schools and working on a proposal for a public information board to pitch to whoever becomes the mayor after the election in May. It’s heavy election season and all work at the Bashkia is at a bit of a standstill until after May 8. Yet another reason to get outside and focus on work elsewhere for the time being!