I’ve been hearing the phrase “Ku e ke humbur?” a lot over the past few days. It literally means “where did you lost?,” and is one of those Albanianisms that is funny in literal translation but actually makes a strange amount of sense. Plus, it’s true – I have been a bit lost lately. At least from Lezhe and my Peace Corps life.

After two weeks with my parents traveling all over Albania and in Germany, I’m finally home and am picking up the pieces of past projects and making the to-do lists for new ones. Also, It’s as if summer suddenly began while I was gone. Everything is open later and it’s a bit more festive feeling around Lezhe. The new PC group is at site and done with training and there’s a lot of new energy among the volunteers. Now that it’s officially summer, there are new plans and travels to think about, as well as the return of time spent at the beach nearby. More stories from my travels and photos to come soon!

In the wake of the election I’m switching gears and preparing to show my family around Albania. On Monday my mom, dad and sister will arrive at Rinas airport. After a year apart, the 4 Hammetts will all be road tripping together….something that hasn’t happened in quite a while.

I’m excited to show them my home, and my friends and “family” here are excited to meet my actual folks. This is a culture centered on family ties, so the fact that my family hasn’t been all together in over a year is baffling to most Albanians.

We’ve got some adventures planned and will be traveling together to Germany for a few days after spending time here in Albania. I’ll be offline for a while, but I’m sure there will be plenty to tell when I return! 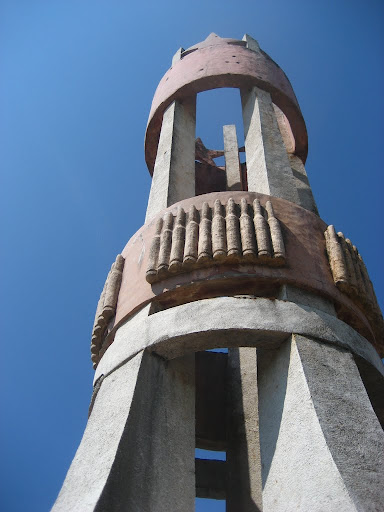 Featured prominently in my album from our recent hike from Tepelene to Himare are several communist – era memorials. These “Lavdi Deshmoreve,” or memorials to the heroes of past wars (of the communist age), are everywhere in Albania. Today they are, for the most part, abandoned and rarely visited. Sometimes they blend in to the creative cement architecture of the 60s and 70s that prevails in cities like Lezhe, but when they appear in small villages or out in the areas between mountains they strike quite a contrast with their surroundings. Ironically Cinco de Mayo in Shqiperi is “Dita e Deshmoreve”, so our Lavdi (right down the hill from my house) is all decked out in flags today.

My cousin recently sent me a link to a photo essay about similar memorials across the former Yugoslavia. For the most part Tito’s interpretations of the Albanian Lavdi are more architectural and visually striking. One of my favorites is the following: 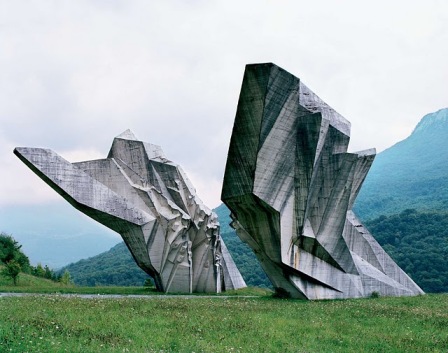 The rest of the essay is worth a look. Makes me want to take a trip across Serbia/Bosnia just to visit these remnants from a not-so-distant history! Thanks, Wade, for the link!

So we’re a bit behind the eight ball here in Albania in terms of international news.

The overwhelming amount of media coverage surrounding the death of Osama Bin Laden that I can only imagine has taken hold of the US hasn’t happened here. It actually took me a few days to hear about it….and when I did I had to google it to make sure it was true. Just evidence of how disconnected I sometimes am from anything not Albania.

But, today at a coffee my friend Max said “I guess I should wish you congratulations on your enemy’s death.” Jen and I looked at him blankly…then laughed when we got the joke. It’s kindof refreshing to not be in a world where a terrorist’s death is the only thing we hear about!

Hiking in Albania = shepherds speaking dialect, fording rivers barefoot, rocks rocks rocks, spiky plants not eaten by grazers, sunburn lines, waterfalls first audible then (with a little effort) exploreable, sheep, scrambling through brush, trails that end and pick up again then end then pick up, more sheep, erosion and trash dumps, abandoned ottoman buildings, crystal waters over white stones, flowers carpeting every surface, sweat, neverending descents, raki and mohabet in village homes, sheep dogs deterred by a thrown rock, communist memorials in the middle of nowhere, extreme geologic diversity, goat bells in the distance, campfires made with borrowed wood, sweeping views, occasional “forests” (stands of trees)….and a whole lot of confusing where-are-we-going-ing and eventual satisfaction and a sleeping bag on the floor at a friend’s house at the beach after two days on the trail.

Thanks to Chris Hassler for the video, Seth and Raino for making plans and for everyone else for being there…I’ll miss the G12/11/11.5ers from this adventure!

Hike was two days – from Lek Dush, a village west of Tepelene…one night in Kuç…then on to Himare the second day (through Pilur). Photos soon to come on the photos page. 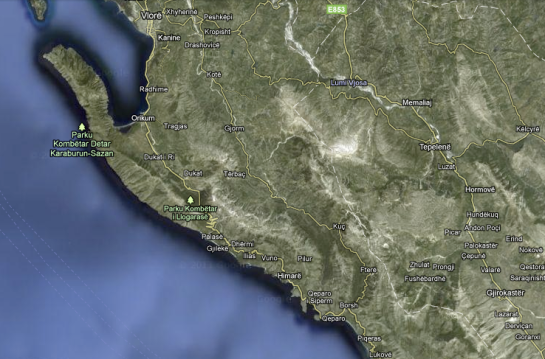 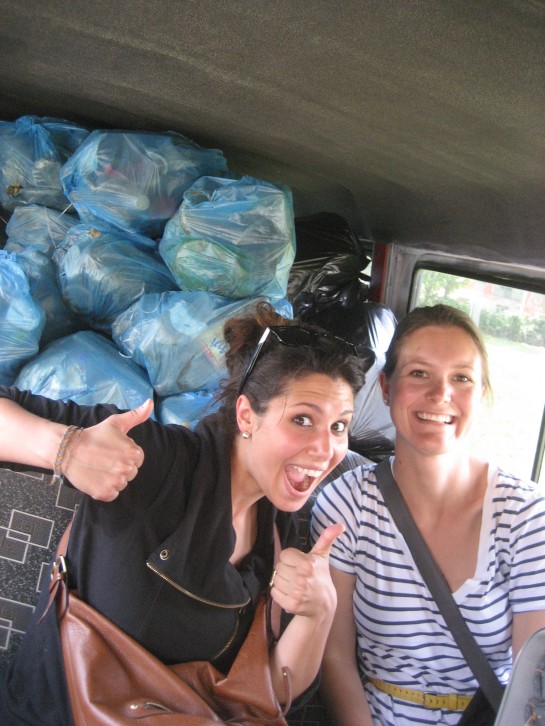 I feel like I talk about and think about garbage an awful lot here in Albania. From the very first day I was at my host family’s house and they took out the trash to the curb and literally dumped it there, the solid waste issues of a country in transition have been very apparent. Here in Lezhe the city is relatively clean and has a recycling program. But the fact that nothing is actually recycled once it gets thrown in the bins and a lack of public knowledge about the need and reason for recycling means that we effectively have a bunch of different colored trash bins. It’s frustrating, but the Bashkia has plans and funds to improve the system in the coming years.

Visitors and locals alike may complain about the pollution here in Albania, but the truth is that taking out the trash in a way that we as Americans would consider “responsible” or “appropriate” is actually really difficult. Most families in villages actually burn all of their garbage (yes, even the plastic) because there is simply no place else to throw it. Dumpsters and any sort of collection is limited to cities, and even then there are so few landfills and the cost of using a landfill is relatively high so many cities simply take their garbage elsewhere and burn it too. Jen and I got a good sense of just how difficult it is to throw things away here when we helped out with a clean up last week in a village near Lezhe.

As part of the Outdoor Ambassadors national committee, Jen and I helped run a fundraiser back in early March at a club in Tirana. As a committee we decided to use the money to provide small scale competitive seed grants for projects across Albania during the week around Earth Day. Agim Koka, the brother of a good friend of mine here in Lezhe, submitted an application for a one-day trash cleanup in the village of Torovice. Jen and I went out to the village last Friday to help out and see what Agim had planned. It was one of the most surprising and rewarding days I‘ve had here so far.

When we arrived Agim had planned a short presentation with the kids at the elementary/middle school about Earth Day, the environmental movement, etc. Unlike the kids I taught about recycling the week before in Lezhe, these students had never heard of Earth Day. After talking about the plan, we headed outside to a small football field with some latex gloves and black trash bags. The amount of trash that met us was overwhelming. Really disgusting stuff covered about a third of the village’s football field…and it looked like it had been that way for a while. Even in two hours with 40+ eager kids, we didn’t make a dent in what I can only assume has been Torovice’s trash dump for a while now. Everything from dirty diapers to plastic bottles went into the bags as the kids eagerly helped clean up the only real public space in their hometown. After only about 20 minutes Agim and I had to go search for and buy new garbage bags. The effort and will of these students to improve their home was something I have not seen in Lezhe yet – the city attitude is certainly different. 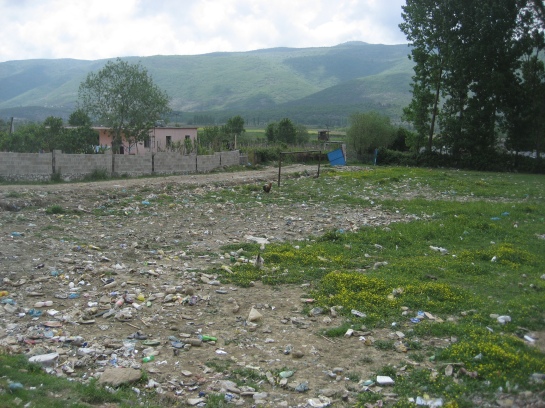 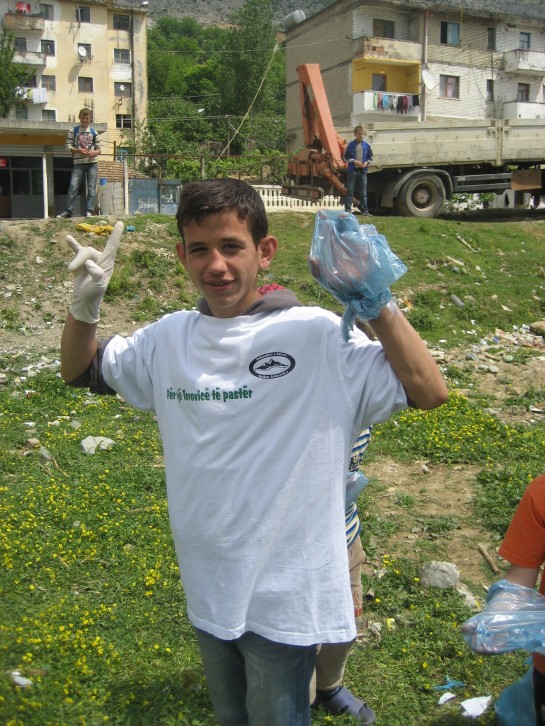 Agim had written into the grant application that he would find a truck to remove the garbage (there are no dumpsters in Torovice – the nearest collection system is about 20 min away). However, it soon became obvious that he had had trouble finding someone and we were stuck with a huge pile of garbage in the middle of the field and no way to get it out of town. After a little encouragement he went to talk to a furgon (minibus) driver, who agreed to take the garbage out to the main road with us. I was so surprised he agreed to literally let us trash his minibus, but he backed it up to the pile and with the kids’ help we piled all the bags into the van and filled it to the roof, covering all the seats with dripping gross waste. 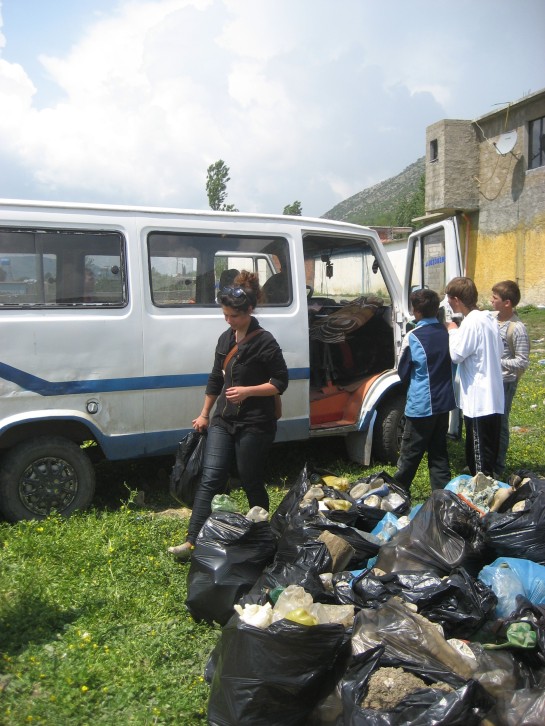 Jen, Agim and I piled in with the trash and the driver and we set out for the next village which supposedly had dumpsters. We searched in vain, and then ended up having to drive all the way to Lezhe to find a dumpster to put all the trash into. Picture the four of us on the side of the main highway going through town, pushing garbage bags out the window into a dumpster while the driver looks out for the police. It was hilarious and dirty and frustrating all at the same time. In the end we had to go to three different dumpsters and we filled them all.

After seeing the state of the van after the bags were removed, I was really surprised when the driver wanted to stick around to go for a coffee/still talk to us. As a resident of Torovice himself, he was so impressed with what we had done, even though it really only made a small small dent in the overall state of the fushe e futbollit. He encouraged us to think about going back, and I definitely would like to work with those students again. Perhaps Agim and I can talk to the village municipality office about getting a dumpster or some sort of collection system put in for Torovice? It’s rare that I am so impressed by the effort and initiative of Albanians, and it’s easy to get discouraged and overwhelmed about the solid waste problems here. But, after a day in Torovice, I feel a bit better about the future of taking out the trash… at least some people are thinking about it/getting creative/spreading the word. Unfortunately the real problems for Albania are more systemic and lie in the complex issues surrounding waste creation itself (why do we need all these plastic bottles/bags in the first place?). However, I was proud of the effort and willingness to make a change that I saw in Agim and the students on Friday, and I feel hopeful for the future of a cleaner Torovice.