A few weeks ago I was meeting with a few of the girls from the Lezhe Outdoor Ambassadors club about a new project we are taking on (promoting reusable grocery bags!). We were speaking in English and one of the girls was talking about her summer, how some of her family who live in Italy were back staying with her for a few weeks, and about how all the “refugees” were back in town….

I gave her a puzzled face, then we laughed at her accidental substitution for the word “emigrant” and she realized the implications of what she had said. It was a moment of language-gaff bonding for us….something that rarely happens with these girls as they are some of the best English speaking Albanians I know.

In the days that followed, I reflected on her comment and thought that with the number of people coming into town, sometimes refugee seems like the appropriate term.

As family returns for the summer from Crete, Athens, Florence, Rome and other points in the Albanian diaspora, it seems as if Lezhe has almost doubled in size over the last few weeks. With this influx, the amount of English spoken around town is also increasing. After hanging up the phone from having a work conversation with another PCV in English, people ask me on the street in English if I am lost. No, thank you. I’m not lost. I live here, believe it or not. While events like these are frustrating to get used to, the sudden rise in population reflects on one of the things I love most about Albania – the importance of spending time with family. July and August are not only vacation – their time for reunions, for big family meals and for spending time with those who normally live outside the country.

I know I’ve talked before about the odd in-between consciousness that comes from being an expat living in an adopted community, but it’s something I am really noticing here this summer. I have been mistaken more and more often recently for a tourist, something that always takes me by surprise and prompts a knee-jerk reaction in my adopted “hometown.” I finally feel like I have a chameleon-level of language proficiency and am a part of my community, but the call outs in English just remind me that I am still, and will always be, an outsider. Sometimes it seems that I have “tourist” tattooed on my forehead.

Maybe it’s because I am the only American in town this summer, but last year I don’t remember noticing this influx of Albanian “tourists” quite as much. I think I accepted the fact that I was, in effect, a tourist here myself. But now, who is the tourist in this situation? Me, or the Lezhjane who wants to help me out but has, in fact, not been in Lezhe for the past 5 years because they have been working in Bologna/New York/Detroit/Athens/Frankfurt….? In a way we both are.

Later this week I am escaping to be a “real” tourist in Bosnia and Croatia with one of my close friends from the states (and our mutual good friend who is my fellow PCV). It will feel refreshing to be outside the dual life of tourist/resident and be able to break out my camera and accept my lack of linguistic skills and just get lost in a city. More to report when I return!

Well, I recently recovered from having 28 people stay at my house and almost shooting myself, some friends, a dog and a power line with fireworks over the span of one weekend (July 4th!) and then barely had time to get back into work before I taking a trip to the mountains. Also – I’ve started working on some tourism projects with the eager new mayor of the municipality in Shengjin (the beach town 15 min away), so suddenly I am a commuter for part of my week and am feeling very productive for a PCV in Albania in the summer. Keeps me on my toes…and gives me an excuse to take a dip in the ocean after work.

But back to the mountains. 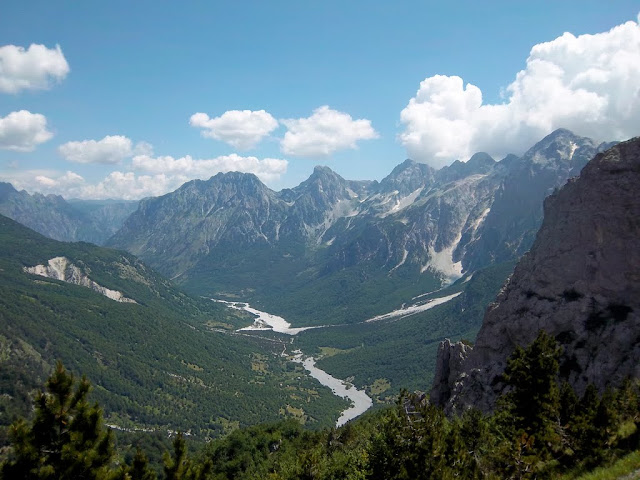 As of this June, the American Embassy now lets PCVs travel to the far north of Albania. This means that finally I can check out two of the most famous areas of the country among foreigners – Valbona and Thethi. The two mountainous valleys look like nothing I’ve seen here yet and are connected over a high pass by a trail that is well marked (probably the only marked trail in the country).

This past weekend a big group of us took a trip to this previously forbidden territory to check it out for ourselves. We traveled by ferry across Lake Fierza to Bajram Curri, visited with the volunteers there and swam in the river. Then we camped in Valbona, hiked the pass and spent the better part of two days in Thethi exploring the historic homes, crystal waters and helping with a British-run summer school that is the only operating school in the valley these days. 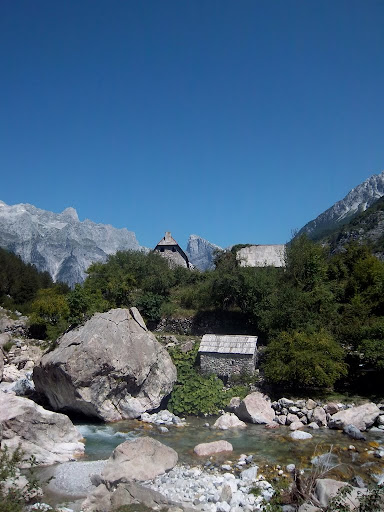 Since the fall of communism, most of the families move to the coastal area close to Shkoder in the winter as there is routinely more than 2 meters of snow in Theth. Because of this, the small elementary school building has fallen into disrepair and isn’t open at all in the school year. The Balkans Peace Park (B3P) summer program has secured funding with the help of the Germans to renovate some of the school and use it to teach English and environmental studies during the summer. Through some contacts I have with B3P I arranged for us to help with the program’s first day. It was wonderful to get to meet some of the kids and have them show us around their hometown. 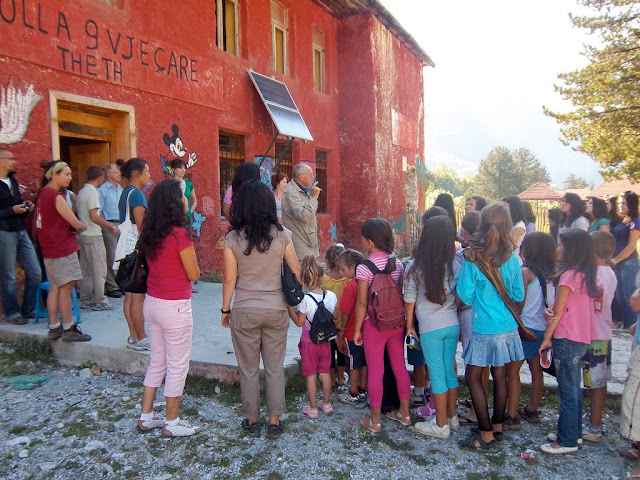 Theth is growing in popularity as a tourist site, but the road in is still very poor quality (the worst I’ve seen since being here) and there’s no electricity. This means that most of the traffic is from foreign, not Albanian, tourists. Because of this and because of the nature of the big old family homes in a unique architectural style in town, there are a lot of small guest houses. So different to see after having worked in an area with big, tacky hotels! It’s also an area famous for being at the center of the Albanian Kanun, or historic legal code that condoned blood feuds. There’s a small museum and a Kulla (tower) that we toured that served as a refuge for those men targeted in the feuds for over 300 years. Kindof like “base” in a game of twisted tag.

The more I learn about Albania, the more it never ceases to surprise me. I’ve been here long enough to see so many changes, and I wonder how Theth will continue to change as it becomes more accessible over time. For now, I’ll let the photographs speak for themselves.

Check out the album on the photos page.

Today I miss home. Albanians I know keep coming up to me today and saying “happy birthday,” but it’s just not the same. Nothing can beat the Fourth of July in Monteagle or Maine with my real family and real barbecue. But, I get to continue to enjoy the summer on the Adriatic with some wonderful friends and have plenty to do at work, so I can’t complain.

For example, check out what the NYT Frugal Traveler has to say about Himare, where my friend Meredith lives.

Wishing you all a great holiday from Albania!