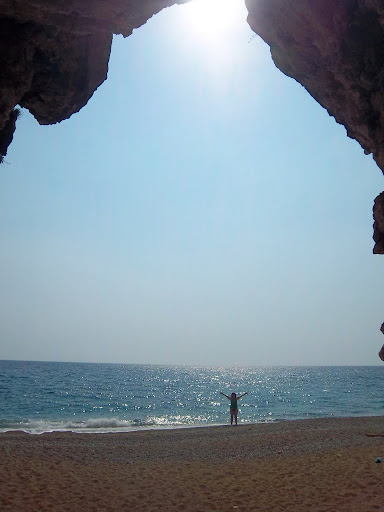 I’ve been overwhelmed this week by the outpouring of love and remembrances for my birthday from not only friends and family at home but also my friends here.

In Albania you treat your friends on your birthday. The fact that I was at home in Lezhe this year meant that I could take out Albanian friends and colleagues for coffee and share some American brownies with the office. I am so lucky to have a group of friends and colleagues here who I am comfortable and friendly with and who, after 1.5 years, get my humor : )

For the weekend following my birthday I had organized a different kind of celebration. A few PCV friends gathered at Meredith’s house in Himare, a beach town on the southern coast. We swam and cliff-jumped and danced and went out with Meredith’s friend Edi the fisherman in his boat to a beach that you can’t get to by land. The water was the perfect temperature and unbelievably blue. Framed by the mouth of a cave on the beach, we bouldered and swam off the rocks and watched a few Albanians with snorkel masks pull up scallops and eat them on the half-shell. Going out in a boat in Albania is a rare and wonderful opportunity that I still can’t believe was possible!  By now we’ve all worked our ways back to our various homes and jobs…but the celebratory mood still hasn’t worn off.

I just share this to say that this week has been an amazing end to a fantastic August full of work and travel and friends old and new. I am so thankful to be where I am and to be able to celebrate and share my life with you all. Thank you/Faleminderit (FLM), everybody! Turning 24 on the 24th was truly a once in a lifetime experience. 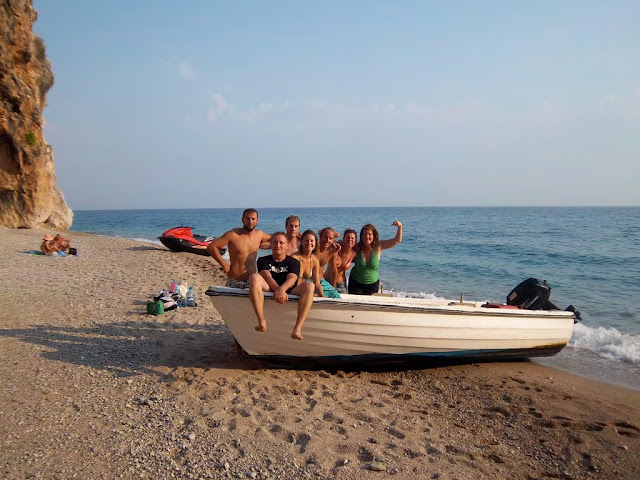 The second summer in Albania has reached its dog days and, to tell the truth, I don’t quite know where it went. It seemed like last summer lasted forever in comparison to these speedy last few months. Perhaps that had to do with the fact that Albania was a brand new place – a playground to explore on the weekends – and now it’s more familiar. My current tolerance for traveling long hours in hot furgons is a bit more limited than last summer’s after having (somewhat) satisfied my desire to see the country. Also – being busier than ever in Lezhe might have something to do with the swiftly passing time.

But, in between projects I’ve still managed to fit in a little exploring.

A week or so ago, following the obligatory PCV reunion at the Korçe Beer Fest, Adam and I headed to nearby Lake Prespa. Prespa is a relatively forgotten corner of Albania – close to Korçe, but not nearly as popular or built up as its neighbor lake Ohrid. In fact, there’s none of the commercialism and beachey-ness of Pogradec. We stayed in Zaroshka, a small village with two tiny hotel/restaurants plopped down in between the haystacks and donkeys on the edge of the lake in the corner just where Albania meets Macedonia and Greece. Looking out from where we stayed over the lake on the neighboring states and listening to the locals speak a mix of Macedonian and Albanian made it feel like we were in a different world from the previous night’s hubub in Korçe.

Zaroshka has a striking and different structure from many other Albanian villages, including Bishqem. It’s completely centralized for a small village. The houses are tightly packed in the center and the farm plots and barns form a ring around the outside. It even seemed like parts of the Communist-era cooperative ideal still remained in that we noticed all the animals of the village being herded together out to pasture. I also wonder how the social structure of such a village differs from a place like Bishqem that is the definition of decentralized. For example. there are parts of Bishqem not far from my host family’s house that my 18 year-old host sister has never been to because she never had any reason to go there. I don’t think there are any strangers in Zaroshkë.

In two days on the lake I was able to relax in a way it’s hard to normally do in my life in Albania. We didn’t make it out to the island (see above) that harbors a medieval church inside of a cave, but we did walk the rock beach towards the Greek border, eat wonderful food, watch fishermen in the morning and evenings and Korçans out for a day trip or wedding. And, we were able to get a sense for another of the subtle yet complex ways geography plays a part in cultural interactions in the Balkans.

For some context here’s a map of the area:

During a tour of historic Kotor in Montenegro with my friends Meredith and Annie and Meredith’s family, I was playing around with my camera and was promptly chastised by our guide for taking a photo of something that was not important.

“I will tell you what you should take a photo of,” he said.

I just returned from a week+ in Bosnia and Croatia and let me tell you – it is all worth photographing. Southern Bosnia/Hercegovina especially. And, the whole trip really helped me place Albania in its historical, geological and geographical context.

Reunited with my friend Annie from high school (who is also one of my PC friends Meredith’s friend from college, ironically!), I traveled by bus to Sarajevo and Mostar in Bosnia. The three of us spent time with my cousin and his friend in Sarajevo who were also traveling around the Balkans. Then, after walking the front lines of the recent war in Mostar, catching an annual diving competition off of the famous bridge and dancing in a bar in a cave, we traveled to Dubrovnik on the coast for a relaxing few days with Meredith’s family. It was all fantastic.

Here’s a glimpse of our journey in photographs. I’ll get more into the details later.