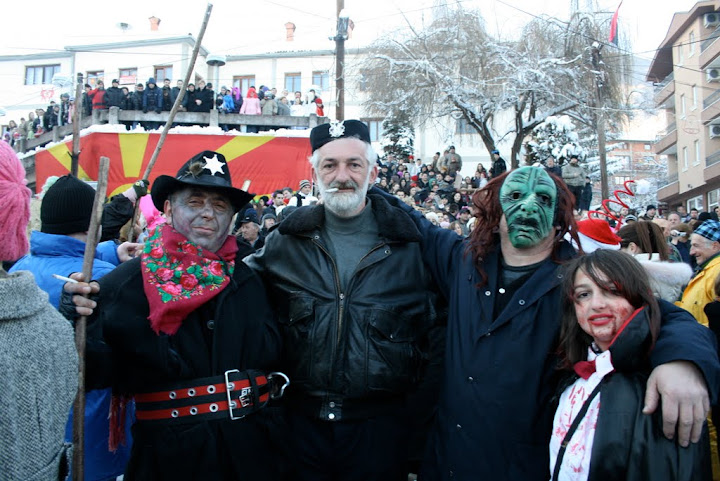 This past weekend I traveled to the village of Vevčani in Macedonia to experience their annual new year’s celebration and carneval. The festival takes place on the 13th – 14th of January each year, and it is supposedly a tradition that stretches back 1300 years or more.

Fellow PCV Chris and I arrived in Vevčani on the evening of the 13th after the first parade with few expectations. We hadn’t been able to discover too much about the events, but we had heard rumors of the festival’s greatness. We were instantly thrown into the mix of festivities and had an amazing time. The weekend was by far one of the most personal, memorable and fun travel experiences I have had since arriving in the Balkans. 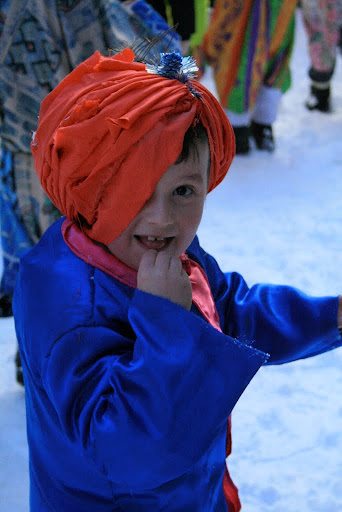 The night of the 13th, the entire city gathered in a frenzy of multi-generational traditional music and circle dancing in the square from 10pm on. Beer tents kept everyone warm and if you looked out over the dancing crowd, swords and tridents and masks and stilts peeked up in time with the music, silhouetted against the stage lights. Chris and I found the circle dancing much the same as in Albania, if not more frenetic because of the energy of the holiday. The whole event was surreal – I was splashed with mud and we counted down to a “new year” as the fireworks went off at midnight just as it began to rain.

In the morning, Chris and I discovered that the rain had apparently turned to snow during the night. A foot of fresh powder greeted us as we ventured out to explore the town in daylight. While peeking into a pen full of sheep the homeowner on the front steps of the house next door called her daughter out to talk to us. Turns out she knew a little English, and they invited us inside for coffee. 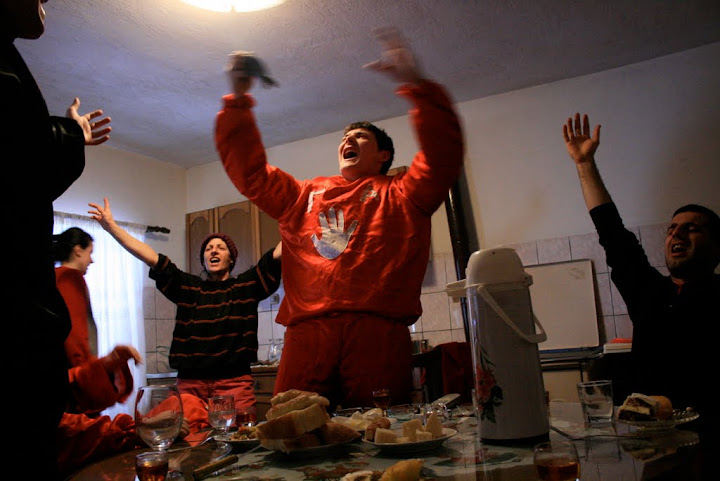 In the house, the family’s twenty-something son and his four friends/cousins were all well into the rakia and were in the process of putting on their costumes and cheersing/dancing away the morning. The mother poured us a glass (they serve raki hot and sweetened here) and turned up the volume on the traditional music TV channel and started singing and dancing around the table. Everyone else joined in….and then the mother smashed a glass against the wall during a fit of impassioned dancing.

It was fantastic. Another unbelievable example of the unhesitating generosity I’ve encountered in the Balkans.

One thing that struck me in this home was that our visit was so natural. Unlike many Albanian hosts I’ve had, they didn’t go to any extra fuss for us or force anything on us. Even when the boys left to go visit the homes of their friends and family around the village and they invited us to come along, it was completely comfortable and sincere. No pressure. We looked at each other and said okay and headed out after them into the snow. 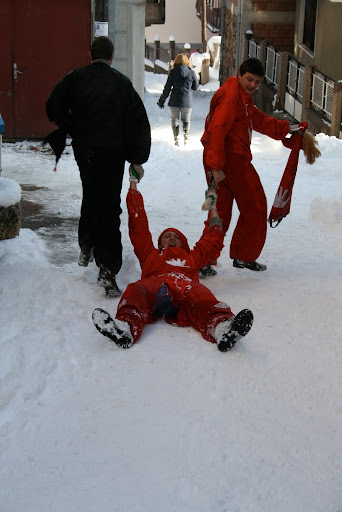 For the rest of the morning and well into the afternoon we were with these boys/men in four different houses. Each one was set up to receive us and other costumed revelers with food and lots of warm raki. We learned a little Macedonian, and, as the day progressed, we encountered just about all the men in town – all dressed up and in various states of sobriety. At around 2 we ended up back in the center of town and a chaotic “parade” of sorts ensued with all the costumed villagers and kids making merry around a bonfire. Many of the costumes are burned as part of the festivities. The guys we were with took good “care” of us and definitely made sure we had a good time.

Among the costumes we encountered throughout the day were Obama, Angela Merkel, cowboys, a series of trees and lots of devilish/ghoulish creatures. I gathered that the villagers are very proud of their costumes and work on making them all year long. Many are of a traditional type – the guys we were with had older costumes that represented membership in a “krewe” of some sort – but many are also metaphorical or satirical and have to do with current events or political issues, most of which I didn’t understand. 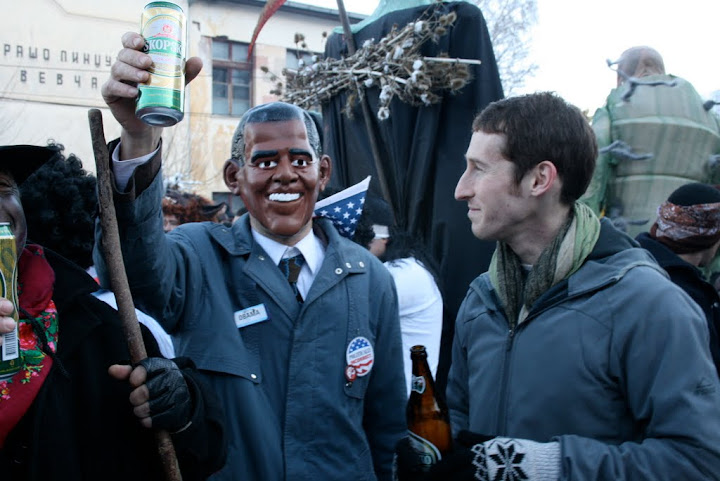 After taking a break from the revelry, Chris and I walked past the bonfire again, only to meet up with two of the guys we had been with all day….still drinking and hanging out with a few stragglers. They immediately said “Chris, Laura – you are coming with us,” and took us to their upstairs family home in the center of town for dinner with their family. The food was fantastic and everyone had that tired post-holiday dazed look on their faces so it was okay to sit at the table and just be silent and tired and take it all in. 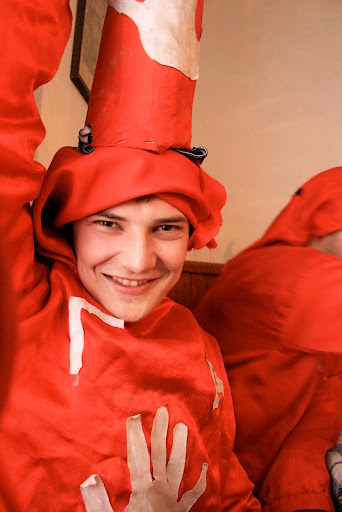 Photos are up on the photos page…and check out this video for an idea of what it all looked like.

Also – this article quotes the festival as ” always [being] held on St. Vasilij’s day – the beginning of the New Year according to the Julian calendar.” One of the houses we visited was the house of a man named Vasili. I now understand why they made a big deal about his name and the day.