This weekend I am in Elbasan with 40 students and about 16 PCVs from all over the country at the Outdoor Ambassadors Youth Leadership Conference. Despite heavy snows all over the country (even in Elbasan last night!), we all arrived safely and are immersed in the thick of project idea brainstorming, team-building exercises….and a bit of fun, too! We had to cancel the nature hike, but a riveting game of jeopardy with questions from the “worst case scenario” survival book was a great ice-breaker.

It’s still amazing to me to be involved in an organization that can bring people together from every corner of the country towards a common goal. I love seeing the students interact and feed off of each other’s energy. The two students I brought with me from the club I lead in Lezhe are so confident and independent…even in comparison to when we traveled together to the summer camp last June. Seeing this is inspiring for me in my frustrated-with-the-bashkia winter slump, and I am so proud of how far they’ve come.

Right now we’re working on developing goals and objectives for community projects, and we’re reassessing their film night project to try and see what steps they can change/implement to create a successful, effective project to promote volunteerism and care for the environment in Lezhe. It’s nice to let them develop the ideas themselves….and get feedback from their peers in other cities.

A big thank you again to all who contributed to the Peace Corps Partnership grant that helped fund this weekend conference. Two days may not be much, but for these high-school students it’s an inspiring experience of a lifetime. Oh, and it’s fun for me, too!

Just want to offer a big “Thank You” to all who contributed to the Outdoor Ambassadors Peace Corps Partnership grant on the Peace Corps website. We reached our goal this weekend, and are in the process of planning the training for early February.

In the meantime, I’m getting ready to have a small gathering at my house for Christmas and am trying to accomplish a few tourism-related projects before everyone in the office scatters over the holidays.

I hope you are all enjoying the season, wherever you may be! 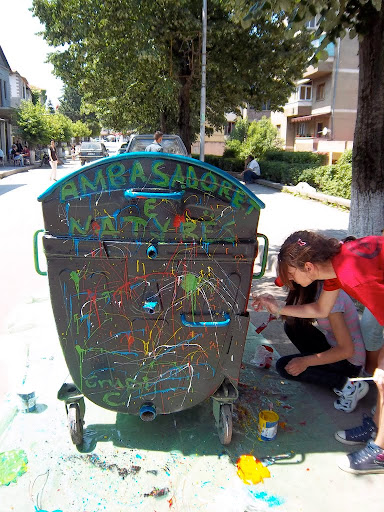 Many of you may know that the Peace Corps-initiated program called Outdoor Ambassadors (OA) has been one of my most significant ongoing projects since I arrived in Albania.

I serve on a national steering committee of six PCVs that promotes the programs of Outdoor Ambassadors’ network of youth environmental education clubs around the country. In addition to supporting actions at the local level (like our reusable bag project here in Lezhe), the committee has been able to organize annual national-level events such as a summer camp and leadership training for members of local clubs. These events are planned in collaboration with Albanian counterparts and are valuable events that promote networking between students and inspire and give local groups the skills to implement community projects when they return to their home cities.

One such national level event is our Youth Leadership Training, to be held this coming February. The training will bring together 30+ youth from around Albania to hone their project design and management skills and environmental knowledge, giving them the tools to bring implementable project ideas back to their home clubs and communities. I helped organize and run a training like this in 2010, and it was a wonderful experience for the students and facilitators alike.

In order to fund this training, Outdoor Ambassadors was selected to be a part of the Peace Corps Partnership Program. This means that we are listed as a project accepting donations online through the Peace Corps website. All donations through the site are tax-deductible. If you wish to donate or find out more about the project, please visit the PCPP site!

I am continually thankful for all of your ongoing support of my time here in Albania through comments, emails, letters and calls. I have tried to keep up with telling my story to you all through this blog, but sometimes I feel like the fun/travel side of my life rather than the work side is more represented here. As you can see from this post, in the life of a PCV, fundraising is often a large portion of the “work” that gets done!

The Youth Leadership Training will be one of my last projects with OA, as I will be finishing up with PC not long after its implementation. I hope to keep you posted as the planning continues, and hope you’ll consider supporting the project from afar!

The first week of September it has, just like last year, cooled off a little. Finally. However, it’s still supposed to be around 90 degrees for the weekend. I’m ready for Fall! I have to keep reminding myself, though, that the Fall I know and love in Virginia is nothing like Fall here. There are no trees that shed their leaves in Lezhe, and it rains regularly. But, at this point I’m excited to sleep with a blanket again.

The past few months have been a blur, but a good one. Now that it’s September things will settle down a bit as Albania returns to work. I’m getting back into a routine. But, things are still changing. In between all the adventuring and projects I’ve taken on over the summer it’s become official that I am the only PCV in my site. Jen, my partner-in-crime and friend/supporter/surrogate sister/co-chef and winter snuggle buddy here in Lezhe is back in California permanently with an awesome job following a medical evacuation in June. She’s fine, just not coming back to be my neighbor in Albania 😦

Most of what I am working on these days seems to be tourism related – both in Lezhe and Shengjin. However, school will start up again next week and I’ll hopefully continue with a project Jen and I had going on with the professional high school here. I’m also really excited about the reusable grocery bag project I have been working on all summer with three girls from our Outdoor Ambassadors group. I received a generous donation from Baggu bags of 100 reusable bags (it pays to write letters to companies!) that my parents brought over from the states in May. I’ve helped the girls design a project to disseminate them through a few shop owners that they know at a low price that will help produce additional bags at a local seamstress shop. I was proud of the girls for being really adamant about the fact that the project needed to be bigger than the 100 bags we had in hand. Right now we’ve negotiated a price to produce more bags, but are waiting for the original ones to sell/catch on so we can start production. It’s exciting to see shop owners really “get” the project and want to promote the bags. If any of you have any ideas for how to best promote/produce a reusable bag or have completed a reusable bag campaign, I’d love to hear your thoughts! 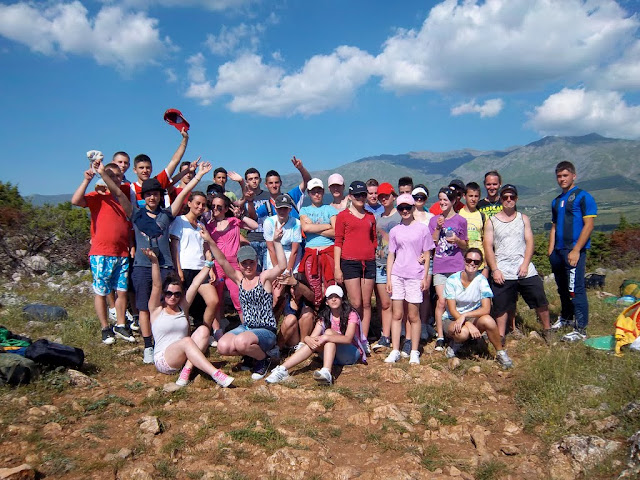 This past week I traveled to Erseke in southern Albania with 5 students from Lezhe to take part in Outdoor Ambassadors’ summer camp 2011. We as the OA committee (I serve as the secretary) worked for several months to plan and organize the 5-day camp that included 60 students from OA clubs in 13 cities across Albania. Libby, the camp coordinator, did an amazing job at figuring out a schedule and getting everything together at the last minute. In my other OA role as a club leader in Lezhe, I spent an inordinate amount of time talking with students and their parents making sure that they would trust me to take their kids 9 hours away from home for a week. The idea of summer camp is relatively new here in Albania, which meant that just getting the students to be able to come was almost more work than the camp itself!

When we finally arrived, the camp was an refreshing break from work in Lezhe. Most of the students spoke great English so I felt spoiled by not having to work at speaking Albanian all week. I led nature hikes and a project design session where students shared ideas and started planning for environmental community projects at their home sites. But, I also got to join in the fun and play frisbee, watch the recyled materials fashion show, tie dye, make paper, do the high ropes course, spend time with some of my best PCV friends here and generally enjoy being outside in beautiful Erseke. 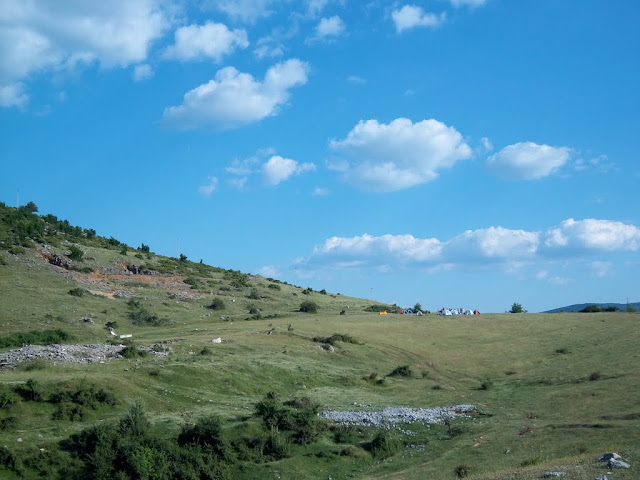 The most rewarding/exhausting activities happened on the last two days of camp. First, on Thursday night, I was assigned to help out with the second overnight hike. We took half the students to a beautiful spot about an hour away from camp and hung out for the afternoon and evening. We explored nearby bunkers, played American football with a stuffsack stuffed with a t-shirt and the students all sang Albanian songs and danced and told jokes around the campfire. The stars were unbelievable and the weather clear and cool. Most of the students had never camped out before, and it was great to see them setting up tents, learning about camping ettiquete and having a wonderful time together outside. That is, until they wouldn’t go to sleep and kept singing and shouting well into the morning hours.

The next morning, bleary eyed and needing coffee, I helped the whole camp complete a community project within the city of Erseke. We spent two hours painting four dumpsters in teams and it was incredible. The only requirement for each team was that their dumpster had to include an environmental message of some sort. At first the students had no idea what to paint and were really worried about getting it “right.” But then, once they started, the ideas kept flowing and they really got into it. As people passed on the street they asked us questions about what we were doing, who we were, why we cared so much about their city, etc. It was fantastic. At the end of the painting process the mayor of Erseke and a representative from PC staff came around to “judge” the competition. It was wonderful to see the students be really proud about what they had accomplished in such a short time. And, all our planning and lobbying for this activity with the city as PCVs paid off in a big way. Afterwards almost all the students were excitedly talking about doing something similar in their hometowns of Pogradec, in Kukes, Burrel, etc.

I came away from the community project and the whole week feeling like I had helped make something meaningful here, which doesn’t happen very often. I think it’s the idealist in me, but inspiring students to take ownership and responsibility for their home environment is something I really enjoy. I felt it when I was teaching architecture at Explo, and it’s definitely a big part of my work with OA in Albania. Feeling their energy and desire to make a change was a nice break from being at the Bashkia with the grown ups….where most people still don’t know what I am doing here.

More photos on the photo page!