This past weekend I traveled south for a last jaunt in the Albanian wilds before closing my service. Chris, Adam, Casey, Ryan and I aimed to head from Gjirokaster to the beach town of Borsh just south of my friend Meredith’s house in Himare….but instead we got a bit turned around in a few canyons and ended up in Kuq, the town we camped in last April (see this post).

The weather broke just as we were leaving Tirana to go south, and the weekend was clear, sunny and wonderful – a warm respite after all the rain we had in April. As usual at this time of year, the hillsides were carpeted with flowers…..making all the bushwhacking we did a bit more pleasant. 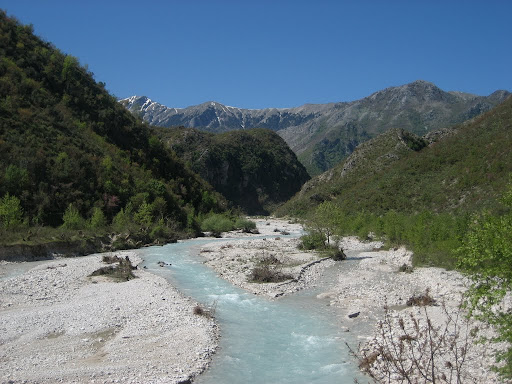 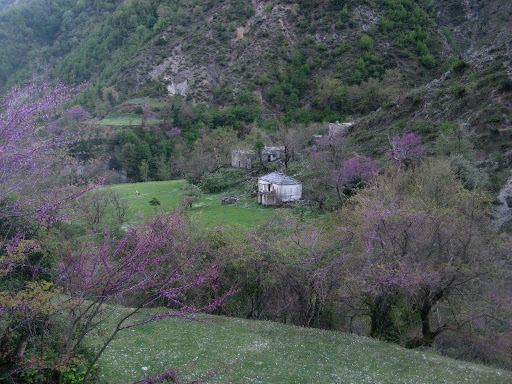 We hiked from the village of Zhulat north to the nearly abandoned hamlet of Kaparjel. After asking the two villagers we could find the way to the coast, we followed a wash north on the second day, finally popping out on top of a ridge above the tree line after several hours bouldering without any evidence of humans at all. And all we saw from the top were more mountains…. 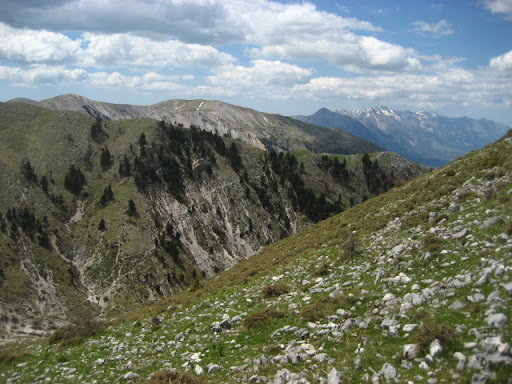 Thinking we might be in trouble, we headed down towards the only road we could see (road = civilization), traversing until we arrived at the dirt track in the valley. At that point, a few of us who were on the hike last April recognized where we were, and, feeling a whole lot better, we all headed downstream to the village of Kuq.

Ironically in Kuq there had just been a celebratory ceremony with the PRESIDENT of Albania….so there were plenty of people around leaving town to give us a ride out to Meredith’s house in Himare. Even after all the natural diversity we had just hiked through, the ride out was comparatively gorgeous – we caught the sun going down over the Ali Pasha castle in porto palermo and the ocean beyond.

In all it was the most adventurous of all the multi-day hikes I’ve completed in Albania. But, there isn’t much that a few days at the beach in Himare can’t heal, and I’m feeling very recovered after a few refreshing jumps from this cliff: 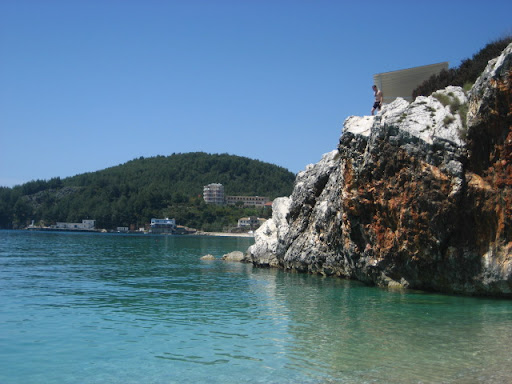 More of my photos from the excursion are here. Adam’s are here.

A few weeks ago I went on a long day hike with Kim and Jeff near Gramsh to a help Jeff photograph a local tourist site for a website he’s been working on. Our destination: a rickety bridge across the entrance of one of Albania’s beautiful canyons. Too bad the water was cold and conditions were snowy, or we could have swum into and explored the canyon within.

Kim was brave enough to make it across first – step by step. Not as rickety as it looks, but the wood does creak ominously.

What none of us could figure out was – where does this bridge go to? It seems to be in the middle of nowhere, and not convenient to anyone as the river is easily fordable (well…we did get a little wet) just downstream. Also – one side is a basic dead end into a forbidding uphill slope. A man we encountered on our hike back to the road claimed his village was up that hill….but it seems that no one uses the bridge to get there anymore. Seems like it would be great to jump off of for a summer swim….

Just another day in the life of helping develop tourism resources in Albania.

As a last hurrah before moving up to Lezhe, I traveled with a few other intrepid souls down to Dhermi (between Vlore and Saranda on the coastal road) for some beach camping with a few group 11 and 12 volunteers. The only problem with the trip was that I had to bring all my bags full of stuff with me on various busses, cars and furgons all the way south….and then all the way north again…

It was so worth it. A full moon, white rocks, crazy pass you have to drive over to get there, the deserted beach, good friends, night swimming, powerade-blue clear water….all made for an unbelievable evening.

What follows is shameless propaganda – come.visit.albania.

view to the south

view to the west

Last weekend a group of us from Bishqem and a few of the other small training sites west of Elbasan in the foothills traveled to the one training site east of the city in the mountains, Librazhd. The trainees in Librazhd are a little spoiled in my opinion. First of all, unlike rural Bishqem, Librazhd is actually a city of about 12,000 people. There are actual stores and banks in this town. Secondly, the mountains surrounding on all sides are gorgeous.

A group of five of us hiked up along a few ridges up over the town for the better part of the day. We climbed a good ways up above the city and could almost glimpse a peak in nearby Macedonia. This is such a small country! And, because we were close to the border, there were tons of bunkers left over from the communist era. Supposedly enough bunkers were built during the 1960s and 70s so that the entire population of Albania could be inside them. All that preparation for an invasion that never came. These bunkers are everything from a small cement shelter to a tunnel built into the mountain to store tanks. Though they are pretty ugly, on a hike in the hills they are open and ready for exploring. In the usa they would be blocked up and off limits in no time, while here they are almost like public shelters – often full of sheep poo from farmers who bring their animals up the hills. The large ones near Bishqem are closer into town and now function as barns, garages and storage facilities.

Something I hope to get more involved with here is the mapping of trails in Albania. A few other pcvs have started a website called bunkertrails.com and are starting to upload good hiking trails via GPS. Tourism development is one of Albania’s huge opportunity areas and one that I will most likely be working in quite a bit.